Robert came to Driven after tearing his right ACL for the third time in late 2013. After undergoing surgery and his initial physical therapy, he started with us in _______.

Wanting to continue to be able to participate in life and continue to do athletic things like ski, run, and enjoy the occasional flag football game, we quickly set out some parameters to guide our training program.

Fortunately for us, range of motion was not a big issue for Robert and he quickly improved his ability to control progressively more challenging movement patterns.

That was the general plan – start with relatively simple lunge and squat patterns that he could easily control without compensation. This is where most plans stop, but for anyone who lives an active life, it’s not enough.

This brings up an interesting question when training clients – we know the mechanisms by which ACL tears usually occur, and conventional wisdom would tell us to avoid them. That way, we can feel satisfied that they didn’t get hurt while working out.

Gary Gray, one of my biggest influences in terms of how I think about training, uses his front yard/back yard analogy to describe situations like this. When you’re raising kids, it’s safer to keep them in the back yard than it is to let them play in the front where the road is. But then again, is it safer? What happens when they end up in the front yard, unsupervised, with cars zipping by? After all, life is pretty good at throwing us the occasional curveball, ready or not. If they’ve never been there and don’t really know what to do, have we done them a favor or a disservice by keeping them safe in the back yard?

That’s how we look at training the knee to be truly ready to return to play. At some point, you have to put the knee in positions where it is at  a mechanical disadvantage. In the backyard, we can land quietly with the feet parallel, the shoulders forward, and the hips back. But what happens when in the heat of battle we’re going up for a rebound that requires the trunk and hips to be extended and the player to land primarily on one leg with only the knee to cushion the impact? All of those perfect landing mechanics are pretty useless in that situation.

This is the process that we’ve used with Robert since the beginning and continue to use now that he’s been in more of a maintenance mode for the past year or so. He’s confident and for the most part doesn’t even think of the knee as being limited any more. The reality, however is that he’s more likely to re-injure the knee than someone who’s never torn an ACL. That means that training in this way will continue to be essential as long as he wants to continue participate in activities that potentially put the knee at risk. The alternative is sitting out or adapting and playing a more limited game. 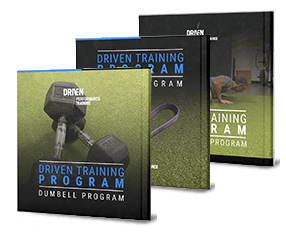 Foundations 1 is a 4 week training program designed to get you back on track, creating a daily workout structure designed around the equipment you have available to you, even if that is no equipment at all. You’ll get up to 6 workouts per week with video tutorials for each individual exercise so you’ll go into every day with a plan to follow. Choose the equipment option that fits your home workout setup the best.